May 1st is marked throughout the world as International Workers’ Day, or May Day. A day when the workers of the world take to the streets (when not facing a pandemic) in every major city around the globe demanding justice, fairness and dignity for all. In North America, May Day has not been as prominent as it is in other parts of the world, but it is still celebrated in most major cities with a variety of political and community actions.  However, May Day isn’t simply a celebration of labour. It is a rallying call against our current economic system, a public declaration that “Capitalism Isn’t Working For Workers,” and an affirmation that a better world is possible. 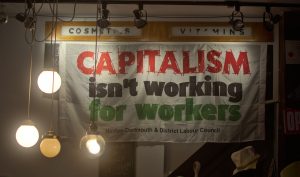 One of the ways various labour councils and unions mark May Day is through the Mayworks Festival. Mayworks was originally conceived in 1986 by the Toronto and York District Labour Council and the idea has since spread to many cities across the country. The goal behind Mayworks is to bring workers and artists together and to use art to explore themes of justice, solidarity and liberation. Art has always been an important way of expressing political statements and Mayworks continues in a long tradition of building bonds of solidarity between artists and labour organizations.

The first annual Mayworks Halifax festival took place in 2009 thanks to the organizing efforts of the Halifax-Dartmouth & District Labour Council. Our festival has since grown exponentially from year to year and has now become Nova Scotia’s largest social justice themed cultural event. Annually, our festival attracts over a thousand diverse audience members who take interest in issues of social, economic and environmental justice.